As the original owner of an BMW E34 525i, I made some upgrades along the way.  One of these upgrades was adding 17″ turbines from a 1991 M5.  I chose the turbines as they were a) readily available at the time b) conservative looking, and  c) could be run without the centers which complimented my black on black E34.  However, prior to having the opportunity to acquire the E34 M5 I talk about in this site, I decided to purchase offset throwing stars if I could find them.  Yes, I know.  I’m obsessed with E34’s.

One day I was looking on eBay and found a reasonably priced set of offset throwing star wheels.  The problem was they were located in Germany.  To my surprise, the cost of the wheels plus the shipping was still in budget.  My dilemma was whether I’d ever see these wheels.  Four weeks later they arrived and they were in great condition.  These wheels sat in my office floor for over 2 months while I arranged to have the transmission work done on my 525i.  Then I got the call on the M5 that was ravished by thieves.  Of course the thieves stole the M5’s M-System II wheels as part of their debauchery.  That was not a problem as I literally had 10 rims to chose from (full set of turbines plus spare and a full set throwing stars plus spare left in the M5 by the thieves).

Most M5 owners sitting in my position would  consider this a “no brain” decision.  Still, I went through the exercise. 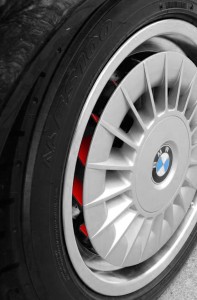 The original E34 M5’s shipped with a very functional 3 piece rim that was great at brake cooling but a little aesthetically conservative for the likes of many enthusiast.  The 17″ turbine rim was so conservative that from a distance it actually looked like a 16″ rim with whitewall tires.  However, as the owner of a set of these rims for the better part of 10 years, I know they can be made to look more aggressive.  I had done exactly that with the set I owned.

For the first 5 years I ran my turbines with the brake fans removed.  This look sported the 5 spoke black centers and was a lot of fun.  They were easy to clean as well.

Eventually these rims needed restoration so I decided to attempt something fun while in the process.  When they refinished the rims, I had them do two things.  The first is fairly common.  They polished the lips of the rims instead of painting them.  The second decision was a theoretical leap of faith.   I hypothesized that if I powder coated the actual fan component a racing red, you wouldn’t be able to see it behind the turbines but it would reflect in the polished lips.  This is exactly the way these came out and I loved it.  This customization retained the conservative look of the turbine but as you walk past the car you got a sense of a little more aggression.

The downside of the E34 M5 Turbines as they require constant cleaning and reaching the red brake fan requires work.

Most owners who own M-System II “Throwing Star” wheels run with them.  They are unique, cool, and aggressive all in the same breadth.  The fact that the offset versions feature a 9″ wide rear tire make them that much more functional and visually appealing.  They also allow you to replace OEM brake rotors with cross-drilled version to add even more sport appeal to the car.  Though I love my turbines and am proud of the customization work I’ve done on them, I went with the throwing stars and I will be selling the turbines as I part out my beloved 525i.  🙁 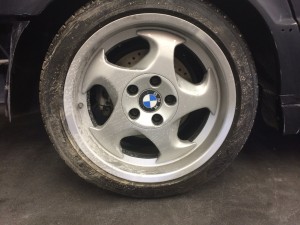 * Note the direction of this rim has been corrected since this photo was taken.