Like many BMW’s, the E34 models featured a plastic shift surround or deposit box that was covered in a material matching the car’s upholstery.  However, the E34 M5 shift surround was different from normal E34 shift surround in that it featured two small wells beside the stick shift and a larger one behind the stick shift.  This design enabled the storage of personal items and was unique to the M5 models.

Like many E34 M5 parts, the shift surround went NLA (no longer available) a few years ago.  The fact that BMW stopped producing this part isn’t that surprising.  Though made out of plastic, the structural part itself is not subject to wear and its covering can be restored or replaced by any local upholstery shop.  Thus, the question has to be asked as to why this part is so sought after and so hard to come by?  Based on my own personal experience and research, there are several answers to this question.

A decent percentage of E34 M5 owners in search of new shift surrounds are ones who have damaged their original one.  E34 shift surrounds do have to be removed from time to time and removal can result in breaking the plastic clips on the part or even damaging the thin edge toward the bottom part of the panel.  Repairs that warrant this are restoration of the surround itself and replacement of the actual shifter boot.  The second of demand is from owners who have had their shift surround stolen.  As detailed in this post, I was one of those owners.  The fact these surrounds are in demand and are NLA poses the second question–if you need a shift surround for your E34 M5, how do you obtain one?  After over 9 months of searching and research, I have come to the conclusion that there are only two sources of the NLA E34 M5 shift surround–buy a used one or buy a 3D print reproduction.

One of the reasons I created this website was to be able and list parts that I needed in hopes that someone would be in a position to help me out.  This is exactly what happened when one reader read my status page and recalled that they had saved one from a friend’s wrecked M5 project.  This is a proof point that there are sources of used shift surrounds.  The best source for NLA M5 parts is from owners who part their wrecked cars.  Though purely speculation, it seams reasonable to me that some BMW financtics purchased new M5 shift surrounds as upgrades for their non-M5 E34’s.  As these cars reach end of life, it is plausible to pick a surround up from these owners.  Still, the supply of used M5 shift surrounds is limited and will continue to decrease in numbers as time goes on.  If you are looking for a part, your best course of action is:

Another promising source for NLA E34 M5 parts is 3D print production.  Though this option does not provide you with an OEM part, it is better than not having the part at all. You will see discussions related to 3D print production like this one on the M5Board and other enthusiast forums.  I will caution that even though 3D printing is a common buzzword these days, it is not as easy as it may seem.  #D printing design is an engineering exercise in engineering and the E34 M5 shift surround is fairly complicated in its design. 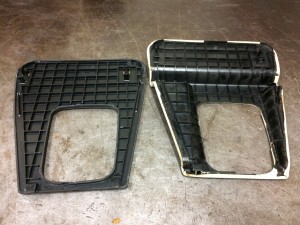 If you are in need of an E34 M5 shift surround, you are going to have to be patient and persistent in your search.  Actual part numbers and covering options are detailed at RealOEM.   If you can source one used, don’t get caught up in the covering as this can always be changed by an upholstery shop.  If you can’t find one used, keep an eye out on the 3D printing discussion as several enthusiast are getting close in their designs.